This article appears in the Winter 2018-Spring 2019 issue of Boulder Magazine.

By definition, a chimera is magical. In folklore, it’s a single creature composed of the parts of different animals. In modern science, the term refers to a being with more than one set of DNA, and owner Edwin Zoe sees both these meanings embodied in his new restaurant, Chimera Pacific Rim Cuisine and Bar, an elevated pan-Asian concept that’s been a dream of his for more than 25 years.

“At Chimera, we’re not just doing one specialized, narrowly defined cuisine but instead making our own creature composed of parts of things I really love,” says the successful restauranteur and executive chef, who created the hit Zoe Ma Ma street-food eatery in Boulder, then brought Zoe Ma Ma to Denver with a second location in Union Station. “At the same time, (chimera) is very much how I feel about my experience and about food. I was born in Taiwan and grew up in the States, so I feel like I have two different sets of DNA in me.”

Created with such heartfelt and expert guidance, the resulting menu, rest assured, is just as magical as the name implies.

“When you come to Chimera, you’re going to have not only fantastic food, but you’re going to feel transported, like you’re not in Boulder anymore,” says manager Brodie McNeil. He credits this culinary transportation in part to the artful interior design — lit by paper lanterns, softened with ample use of natural wood — but mostly to Zoe’s commitment to authenticity. “With all the preparation that goes into getting the layers of flavor we aim for,” McNeil says, “there’s a lot more prep involved and a lot more thought.”

Take the ultra-popular Chimera Ramen ($15), for example. The broth in the steaming bowl is the result of an eight-hour artisan process, is made twice each day, and includes three types of stock bones as well as mushroom stems and other secrets. That broth clings, however, to the surface of the homemade noodles, which are springy and fresh and topped with pork belly, enoki mushrooms, corn and a creamy, soft egg. The depth of flavor, those layers of flavors, are best enjoyed with eyes closed in bliss as you relax, knowing you’re in the hands of a master. 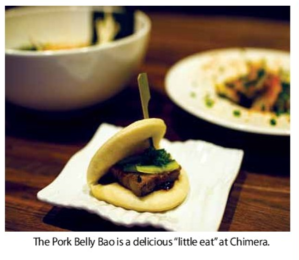 But ramen is only one of Chimera’s many homemade treasures. The wide, ribbon rice noodle in the Everybody Chow Fun ($14), the wraps of the Duck Dumpling ($5 for four) and the Xiao Long Bao soup dumplings ($7 for four, filled with crab and pork) are also fresh daily. In fact, the dumplings are so precise that they’re the sole work of one member of the kitchen crew.

“When you’re cooking food, all your senses are going at the same time. You smell it, you hear it, you taste it,” says Colton Kear, Chimera’s chef de cuisine. “I really love how we create food that engages all of the senses.”

And they hit the bull’s eye with the bao buns, that pillowy soft dim-sum superstar. While available with duck or pork, the Veggie Bao ($4) is the standout with its filling of cucumber, spicy togorashi and a thin round of delicately crunchy panko-crusted eggplant. Such brilliant interactions of textures as well as flavors are found up and down the menu, including in the lip- and tongue-tingling Mala Wings ($7 for four), coated in Sichuan pepper.

“The food is really driven by my belly, by the things I love to eat within the Pacific Rim,” says Zoe, who even hopped over to Polynesia on the bar menu with his father’s original recipe for the Mai Tai. But no matter where the menu roams, he says, “For me, it’s really important for the guest to have a great experience. That really is our compass.”

This article appears in the Winter 2018-Spring 2019 issue of Boulder Magazine.