These three are among the many working dogs in our community. Their responsibilities allow them rights and access to spaces otherwise off limits to animal companions.

The distinction between a working dog and an animal companion is important. “People want to take their animals everywhere, and from the Humane Society’s perspective, we appreciate that people are dedicated to their animals,” says Lisa Pedersen, CEO of the Humane Society of Boulder Valley. “[But] there’s a lot of confusion out there about service dogs, emotional-support dogs and companion animals, and the differences between them.”

These differences matter; sometimes in a life-impacting way for the people these dogs serve. A visually impaired woman recently told The New York Times about her guide dog being attacked by a dog that was being misrepresented as a service animal. Online organizations that sell bogus certificates and official-looking service vests abound.

Here’s the official scoop: A service dog has special training to perform a service for a person with a disability. It is the only type of working dog that is protected under the Americans with Disabilities Act (ADA) and allowed in all businesses, including restaurants. On the other hand, a therapy animal is trained to work with a handler to provide comfort to people in nursing homes, hospitals, schools and other institutions.

An emotional-support animal provides emotional, cognitive or psychological comfort to its owner, as vouched for by the owner’s medical professional. ESAs are not allowed in businesses, but federal law protects reasonable accommodation for traveling with them. These animals are also protected for housing purposes, meaning no-pets policies and pet rent might be waived.

Don’t forget about the dogs that do important work like finding victims of avalanches, searching for drugs or on farms. These dogs, like companion animals, are allowed in public businesses and facilities only in animal-friendly locations.

We talked to a few Boulder County folks about their dogs and the important work they do:

Chosen for his love of the hunt, Buster was adopted from the Longmont Humane Society in 2015 and—after certification as a narcotics team with Deputy Jason Ryan—has become the fastest contraband hunter in the Boulder County Jail. Whether Buster is working a shift or is on a special deployment, the hunt is rewarded with toys, treats and the satisfaction of a job well done.

“He and I can go through about four rooms, clearing them for narcotics and other contraband, in the time a couple deputies can thoroughly search one room,” says Ryan. “He saves us time and helps give the deputies places to concentrate, which is huge for us, because our largest module is 48 cells.”

Some inmates see Buster as a reminder of home life; nevertheless, Buster has built a solid reputation for sniffing out the goods, says Ryan. “When they see Buster, we hear a lot of things leaving the jail through the sewer.”

What to know about Buster: “The biggest misconception is everyone thinks we have the meanest dog in town, and that’s not the case. He has a certain collar he wears to work, and it’s like him putting on his uniform. If we’re in civilian clothes, he does still have a little heightened sense of awareness, but he can shut it off.”

Her warning was unmistakable: Spirit would tap the left arm of her human Liam Bootzin, who has multiple sclerosis, with her nose three times, then lift and hold his arm.

“That was my signal of, OK, I need to be someplace safe where I can’t hurt myself, because the seizure would come within about 10 minutes,” he says. She never raised a false alarm in 12 years of service, he says. “Though there were times I ignored the signal, and that was my fault.”

A border collie-sheltie mix adopted from the Humane Society of the Pikes Peak Region, Spirit was a life-changer for Bootzin, who couldn’t afford an already-trained service animal and so trained her himself with the help of a professional.

Supporting an owner with MS is no easy feat. “Spirit in her prime was a fine-tuned sports car of a dog,” he says. “She knew all of her commands as a word, as a whistle and as a hand gesture, because we knew there would be times where I couldn’t talk because of the MS or might not be able to give a hand gesture. We needed a broader range of communication.”

She could pick up dropped items, knew right from left, opened doors and performed a “brace” to help her owner stand up should he fall. Spirit was the perfect public helper, which was vital to his work as an actor storyteller, performing at festivals and in schools. She even had a service vest with fairy wings to fit into the act. Spirit had been retired for three years due to failing physical and cognitive health, but, as we went to press, we learned that she had passed on.

What to know about Spirit: “People with emotional-support animals or just pets sometimes get a service vest off the Internet and expect to go everywhere. That makes it harder for people with legitimate service animals, when people expect fraud.” 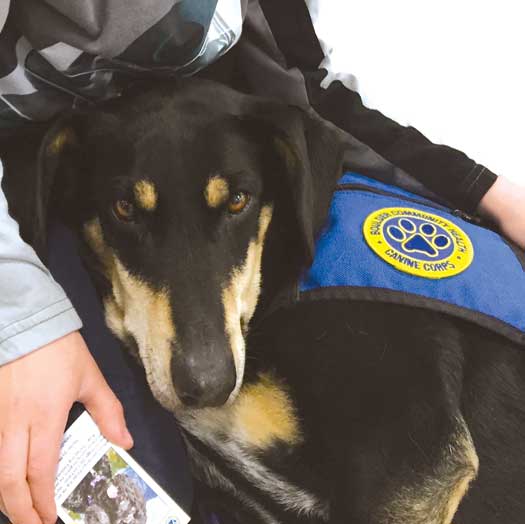 Meant to be a pet after a death in the family, serious health issues almost took Fritz away from Carol Brock immediately after his adoption. “They gave him a 50/50 chance,” she says, “but when he lived, I thought it was because he had a mission in life, and we found later that was to be a nationally registered therapy dog working at Boulder Community Health and the Rocky Mountain Cancer Center.”

Fritz brings joy to people struggling with health problems. He worked once a week for the first 10 years of his life, though now that he’s older, he goes twice a month. Brock says Fritz looks forward to his shifts. “We get the vest out and he starts prancing around. He gets a little pep in his step when he goes out the door with his vest on.”

With his gentle nature, Fritz is a natural at comforting patients, but training was also vital. Therapy animals must be exposed to lots of stimuli—children, noises, medical equipment and more—to be helpful in an unpredictable setting. The training is rigorous and many dogs don’t make the cut.

“He’s been trained for a job,” Brock says. “He understands that it’s his job to comfort people but it’s also his job to be well-behaved at the same time.”

What to know about Fritz: Fritz is one of the few mixed-breed dogs in the Canine Corps program. His charm has captivated all the nurses at Boulder Community Health.

Amelia Dickerson has loved every one of her seeing-eye dogs, all four of them golden retrievers. And with each one, she’s felt slightly guilty that they have devoted the whole of their doggie lives to her.

“My dog isn’t sitting there thinking, ‘I’m doing all this work for you, I could have a different life,’ but I do,” Dickerson says. She is grateful to her dogs for giving her freedom to move through the world. Her current dog, Lotus, walks with her to and from work, is expert at finding bus stops and is trained to intelligently disobey should she misread traffic sounds when crossing the street. (Priuses are an interesting challenge for the blind community.)

Together only 10 months, the two are still in the honeymoon stage of their relationship, which brings its challenges.

“You have to unlearn bad habits learned with other dogs. You also have to learn to trust this new dog and to read their body signals and the different patterns they have,” she says. This fragile trust means it’s vital people not distract her pup in public. Older guide dogs can sometimes be petted, if you ask the owner first. “But with a brand new dog, you may have to be strict. She has to stay focused.”

What to know about Lotus: Her training investment, paid mostly in donations, is about $50,000 to $80,000, while the average working life of a seeing-eye dog is about eight to 10 years. “Dogs don’t live nearly as long as they need to live, in my opinion. In the end, she’s not always going to be there and I’m going to lose that half of how I move through the world. That’s hard, on top of how hard it is to lose a pet in the first place.”

Lemon, a golden retriever, was originally raised by Kris Warner’s family to be a service dog. Minor surgeries on Lemon’s nose disqualified her from medical service, but those imperfections made her the ideal therapy dog, especially when working with children with disabilities.

“The kids at the Children’s Hospital would look at her and see the scar on her nose,” says Warner. “I’d explain that she’s had surgery, and often they would say, ‘Oh, I’ve had surgery too!’ and lift their shirt up and show their scars.”

As Lemon’s handler, Warner had to undergo extensive training along with her dog. Lemon has helped children with disabilities feel more at ease on ski trips and helped Warner’s patients with Parkinson’s Disease with mobility and balance.

Lemon also helps children who have autism stay focused and have fun in school. “The teacher and I came up with the idea of bringing Lemon into the classroom and the kids could read to her,” says Warner. The idea was such a hit that they started making sight words, spelling and math problems fun by having kids throw dice or toys with letters, words or numbers for Lemon to fetch.

“She’s been so well-trained that she can do a lot of different things,” Warner says, adding that Lemon herself seems to love being of use.

What to know about Lemon: A lot of the benefit of a therapy animal is how they help people who may be isolated in institutions, because of their disabilities or illnesses, experience the everyday joy of interacting with an animal. “It’s just so normal to have a dog around, and normal is what they seek a lot of the time.”